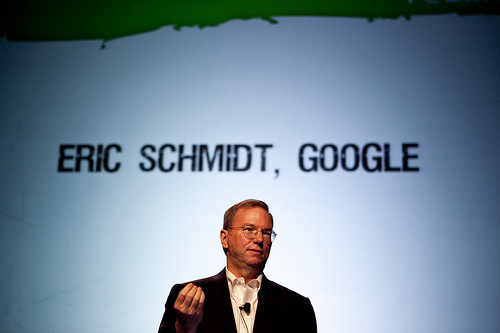 The Google Fiber project in Kansas City got a mention from the company’s Executive Chairman, Eric Schmidt!

UPDATE: See the video Q&A from his presentation (at bottom of post)!

Eric was also asked about about the Google Fiber Kansas City project, and what the ramifications might be:

“At the speeds we’re moving, the distinctions between television, radio, DVD, and high-definition just disappear. It’s all just bits.” That means the businesses of delivering that information will radically transform from today.
“So much of the infrastructure we grew up with is because of technical limitations which fiber simply eliminates,” Schmidt said. “Ours should generate 300 to 500 megabits sustained,” enough for “true holographic images.”
Read more

Below is the actual Q&A from his keynote in which he discusses Kansas City Google Fiber! (Hat tip VentureBeat)


What do you think about Eric’s comments on the gigabit speed network they’re deploying here in KC?

Check out some of our other posts on gigabit speed project!

Are you an Information Technology professional in Kansas City? Sign up & get the latest news/events here! Learn more about us.